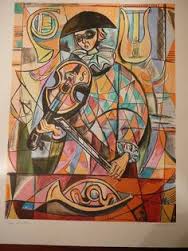 A motley fool of one hundred and two
who freshened the moods of seventeen kings,
confounded ten queens and ne’er a sword drew,
nor suffered the pain of everyday stings,
with a purse always full, a bed always
warm, once offered to share his foolish ways.
Just five simple words, all trials will cease,
enemies vanish, your fortunes increase.
No magic potions, no frogs to be kissed,
an action so simple, it must needs please:
Don’t inhale near the miserabilist.

The miserabilist? A word no one knew
in court or in town, it swiftly took wing
& all through the realm, a strange caution grew
as folks sniffed one another for something
amiss in the way that they spent their days
or their ducats, criticized or gave praise.
And when they approached the flagrant unease
of some poor sad sot, they tried not to breathe
till they’d set his ass or his boat adrift.
Many were crowing of new-found relief.
Don’t inhale near the miserabilist.

The motley fool’s popularity grew
while the rickety king found a new spring
in his step, for his subjects who once knew
only the keys of complaint learned to sing
new refrains. Livestock grew fat on the graze;
barren wombs came to life; a pinkish haze
settled over the land; a tinkling breeze
cooled the fears of poverty and disease.
All ventures thrived; every day brought new grist,
abolished old habits of thought like fleas.
Don’t inhale near the miserabilist.

Now our motley fool was no fool. He knew
that avoidance alone can never bring
joy of the kind that eliminates blue.
Constant surveillance against anything
must eventually flood minds and by-ways
with its very nature. Streaks of dismay
were already seeping like rancid grease
through the gossip and fray, a slick decrease
of focus on five simple words. Once blissed,
now sinister was demanding release.
Don’t inhale near the miserabilist.

Fool, undeterred, he donned his cloak and blew
the air from out his lungs. He stashed the rings
and torques of gold that fortune brought and flew
by night on horseback to an untried king
with retinue who wished to learn the ways
of wealth and surplus. Endless sunny days
accompanied our fool whose mental ease,
well practiced, holds no tics. No enemies
could pierce him, no impostors grasp his gist
of life as serial simplicities.
Don’t inhale near the miserabilist.

The motley fool has never ceased to tease
the humourless within us. Still, he pleads,
let go of consequence. Give wrath a miss.
Breathe deep into the vast where love agrees.
Don’t inhale near the miserabilist!