Picasso man strewn
wide across the beaches
of Marbella, built of scraps
of drifting tide and weed
he sells pain sandwiches
and disappointment wine
the lines to buy his art
stretch all the way to El
Castillo where I met you—
no, not you! See, that’s the
sign. Picasso man shares
words, damn good ones too,
you’re not supposed to feel or
claim, he sets them over
there for strays and lures
the likes of me to pedestals
as if I’d ever climb up one
of those! Projected virgins
with a broken neck, what
good are they? Though mostly
I am sure he does not like
me—whether here or there
it matters not. I have no plan
to integrate the fractured
man. They were the seventies,
what did I know? The better
question is, why am I?
After all these years.
Still looking. 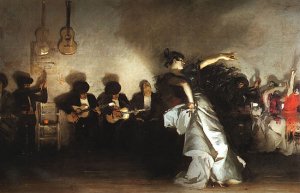 The following poem contains stark
anatomical content; reader discretion
is advised. For the record, I’d also
like to iterate that what you’re about
to read (or ignore) sourced from a
joyful conversation across time
zones. For our 21st century ability
to engage and inspire one another
virtually, I am most grateful.

I am not your Torquemada
dipsy dancer on black velvet
who, with lips like swollen
vulva, swaying hips by laws
of church and God, or by their
breakage grind you into dust
and keep you on the straight
and narrow, flagellating with
my tongue and other flailing
parts when you are not. So
what care I if faithful or obedient
to Nature’s laws and hunger’s
craw are you? We are not
wed. We are not dead. And if
your curiosity of what I say
and do is limited to grand
inquisitor, absent of heart,
then torturous I’m sure you’ll
find my innocence inspiring
my thrust of head and pound
of cleated heels clichéed, my
words they’ll sound to you
like castanets rat-tatting,
short on talent, maybe so
but lively with ferocity,
ecstatic with velocity
and nothing much in how
you might retaliate will stop
what we came here to activate,
so might as well just take
your dreary instruments,
your whips of lead and
sorrowing and find some
other maiden head whose
iron grip on feeling bad
more closely matches
yours. Olé!

How alien I am to me
when choosing from my wounds
to speak, from gaping hollows
left by loves perceived inadequate
they served their time, they’re
gone and yet on guard I stand
divisible, emotions made a
soldiery, my only uniformity
I snap into salute, attention
piqued when those of petty or
attractive rank show stripes
of pain that match my own, or
better, not as great! For then
I can magnanimous appear
in empathy, subordinates will
surely note my stature and remark
among themselves upon my
generosity, no scent of tyranny
emits from these well-practiced
tears spilled out in clever
and effective rhyme.

How strange I make myself
to me, how dubious a friend
when tolerant I am of less
than intimate; most talk is small
enough without my help; our time
deep-squandered bits of nothing
much—agree or not, approve
I don’t or do, so what?

Everyone deserves better!
Of them all, no one will miss
me slipping out, I’m sure, the
door was never locked from
either side, the weak applause
already out of earshot, moonlit
sky, Orion near to standing
whispers in collusion with the
evening star, no metaphors
denied. Across the sky, they’re
welcoming; this rendezvous
of me with Me is love, reunified
and infinitely true.

I have just completed six weeks
of schooling with bees. Don’t quote
me on the time frame. The buzzing
in my head that went on for decades
may have been early language training.

The Queen bee worries that I won’t
get this poem right, since I can’t dance
it for you with my hind end. I told her that
kind of dancing is another form of poetry.

Start with something simple, she said.
Tell them how pre-life hums in hexagonal
thought cells, holding the honeycomb that is
you, only you, safe from fatal buzzings.

But humans, I argued, are far too sizzled
by stress to believe something so six-sided.
Besides, I’d rather say it my own way.
Queen bee sipped her honey. Drone on, she
shrugged, and laid fourteen hundred eggs.

Okay.
What Her Majesty said.
Plus this.

Each of us is a self-containing colony of workers
and drones, baby bees, dying bees, hiving and
thriving an intricate play for the fun of it.

Swarming of people and bees won’t hurt you,
unless you squinch in between them and their
queen who’s looking for a better place to stretch.

If a swarm attacks, state loudly into their whiskery
conformist faces: I Am Not Your Egg Layer. Buzz Off!

Hive invasion is a myth, the untrue kind, drawn
from our tendencies to vibrate in sympathy.

The finest honeys are brewed from a blend of
pollens. Gather what entices, like the bees do,
in parts of your body that were made for the task.

When you have the proper mix of ingredients for
sweetness—and this is the important part:

~~~
© Elaine Stirling, 2011
(with thanks to poet friends who helped me with edits in the original Facebook post)