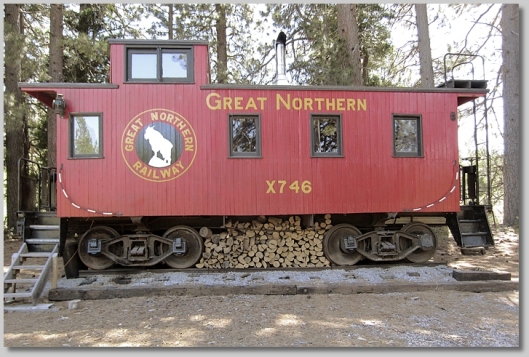 I have a caboose
at the end of my train
with an imp that enjoys
thumbing noses and moons
at the sun when a new dawn
arises my eyes need to blink
and the imp sees his chance
and he hangs from the tail
where he shouts at the passing
terrain, whatcha you gonna do
now, pretty boy?

My imp’s name is Kit, and I do
try to shush him, though not very
much ‘cause he’s got the touch of
a jester at heart, and my brain with
its lore is a bit of a bore, and my
soul isn’t whole unless I can
laugh at the bridges we burn
and the tracks we lay down
and pretend when we crash
that they weren’t our
own handiwork.

The thing is, we all
have to run on the steam
that we bring, and if mine
blows too hot or too cold in
your face, and yours makes
me yawn, we could still show
some grace—not go stupid nutty
all over the place, when our tracks
must diverge. I have no intention
of leaving sweet Kit at the station
or anywhere else for I love how
how he thinks and he sees and
he laughs—he’s divine. Yes,
Kit, my kaboodle, is mine!

Claim and Disclaim live in a box
at the end of the tracks at the border
between Thislandia and Nolandistan.

One is tall, one is small, one is
light divisible, the other squints,
is heavier, can hardly see at all.

It’s hard to say from where I write
perched here upon this wooden stool
which one of them emerges first
at crack of dawn like Mr. Sampson’s
rooster, proud and strong. I’d like
to think it’s Claim. You see his arms,
the way they swing? His shoulders
squared, a happy tune upon his lips?
It’s Claim, oh, yes, it’s Claim,
it’s definitely Claim!

Thislandia, it is a busy place
with avenues and shops galore
to satisfy the cravenest and
never-ending jobs—well, some they
end but something always starts
again—to fill the hours. Claim, if
it be he, today works as a plower:
see him there, both hands upon
the shaft, sure-trudging, turning up
and out those perfect rows of toil.

Now, over there, just to the left
of Claim and Disclaim’s box on rails
Nolandistan hums quiet, growing trees.

Nolandistan is mostly shade, though dappled
bits illuminate from time to time, and things
we leave there never stay, the seeds we plant
dissolve the instant that we lift our hands.

Thislandians despise Nolandistan, or no—
despise is far too strong a word, they do not
like, and even that I shouldn’t say, for isn’t
that Disclaim now creeping out, and aren’t
we here together, you and me, to learn
the natures of our brothers in the box?

The figure leaps from stone to rail, from
lily pad to teasel stem and lands upon
his haunches like a mottled frog within
the bounds, from all accounts in safety,
of the dark Nolandistan.

I’ve heard it said he is the lazy bro,
too full of his own eptitude to bother
with the issues and the worries of
our time, though I don’t know if this
is true, for more and more I see
disclaimers tacked to claims made full
and bright, in honesty, with shadows
falling cross the smiles and furrows
deep upon smooth brows of good
and true Thislandians;

and since we never see the brothers
in each other’s company, catch glimpses
of the two in moments only far too fleet
emerging or returning to their box at dusk—
or is it dawn?—I cannot help but claim
the labours of disclaiming as the greater,
finding ways from over there, not here,
to say, but wait, what if, hold on,
I need to stop and think—

while off he struts, his arms a-swing, the
bolder, never caring, indivisible, Claim
staking and advancing toward the light.

He snipes from a corner
visage with a view, from a 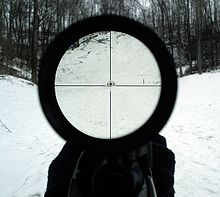 tower not of ivory but of
melancholy hue;

the quadrants of his
crosshairs split the world
in two and two again; I’ve
been the target of his sights
and, lightly grazed, I know
he seeks to right what
can’t be wronged,

and every time he loads
to fire anew, intelligence
sends out a tremor that
alerts brigades and
cavalcades, a blush
of spies report the
movements and
intentionalities that
wholeness does not
see, and while the
sniper feels assured,
his crosshairs tremble.

We are each of us an
infantry, tin soldiers, washer
women, boys and girls, we play
at hide and seek, and as we flush
the grouse and peasantry from all
we fear to lose, our woods deplete
until at last, as integers, we stand
alone reflected in the center of
a crosshairs not our own.
~~~
© Elaine Stirling, 2012